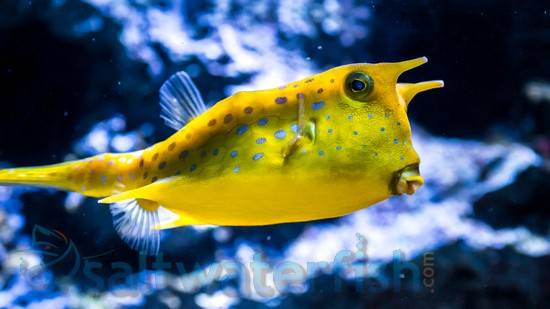 The Long Horned Cowfish,  Lactoria cornuta, is also known as the Longhorn Cowfish, Yellow Boxfish, or Polka Dot Cowfish. This fish is a variety of Boxfish with characteristic "horns" protruding from its head resembling a bull or cow. Though in its juvenile stage, the "horns" are yet not developed. The lovable Long Horned Cowfish is native to the Indo-Pacific Oceans and is a yellow/tan color with blue and white speckles. This reef fish grow up to 20 inches in the wild, while aquarium specimens may reach up to ten inches.
They should be kept in a tank of at least 100 gallons with a sandy substrate and plenty of live rock and natural algae.  The Long Horned Cowfish is a fickle animal and should be kept by experienced aquarists. Similar to other Boxfish species, will exude a toxic poison through their skin if threatened, potentially deadly to other tank inhabitants. It is best not to be housed with other  Cowfish or Boxfish species, as it will become territorial and may become aggressive. It is generally temperate with corals and invertebrates but may be caught nibbling on tubeworms. They are slow swimmers and should be given a low water flow. They also should not be housed with aggressive eaters as they are also slow eaters, and may not be able to compete for food. They should be fed an omnivorous diet, consisting of meaty foods including raw shrimp, bloodworms, chopped clams, mussels, snails, tunicates, and fish. They are not picky eaters and will quickly become adapted to a variety of prepared aquarium foods and an occasional algae wafer and herbivore preparations. The Long Horned Cowfish is often a favorite in the tank because of its endearing and unique appearance. They will thrive in a temperature range of 72-78?? F and a pH of 8.1-8.4.

Currently Longhorn Cowfish does not have any reviews.

Currently Longhorn Cowfish does not have any questions and answers.