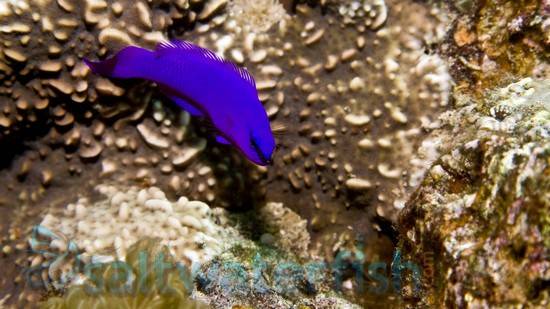 The Orchid Fridmani Dottyback is a brilliant magenta color and has a striking presence.
Dottybacks are a group of small, colorful basslet-like fish that inhabit the crevices and small caves of the coral reef.  Dottybacks can be kept in smaller aquariums, although larger tanks with plenty of live rock are preferable. They are territorial and will defend the area they have claimed as home quite aggressively.
Dottybacks vary species by species in aggressiveness, and care should be taken when deciding which to introduce to an aquarium community.  Dottybacks are easy to feed, and frozen foods such as Mysis shrimp or Brine shrimp are readily accepted. They are also known to feed on small bristle worms, and have been introduced to tanks to help control excessive bristle worm populations.
The family of Dottybacks are well known for their elusive nature. These fish tend to stay within their crevice or cave until it is time to feed. Their color is usually quite dramatic and they are capable of changing their sex.

I would give this fish a higher rating (because it is lovely to look at) had it been more sociable and outgoing. i find this fish very shy and timid. It hid for the longest time that I was certain it died. I was shocked when he finally came out of hiding! It's a bottom dweller.

Although beautiful to look at, I find mine to be so shy and timid that it spends hours hiding in rocks. I barely see him!

Whenever possible I try to order captive bred fish however, and perhaps it's just my opinion, but it seems as if the captive bred Orchid Dottybacks are not nearly as deeply colored as the wild caught ones. Still, he's a great fish; model citizen, no aggression towards any other fish in the tank. He hid for two days but is now out and about all the time.

I honestly expected a much darker more purple fish. This is a beautiful fish, but be advised they are more silver/lavender unless under deep blue lighting. That said my fish arrived healthy, is eating and is a great addition to my little reef.

Currently Orchid Dottyback Fridmani - Captive Bred does not have any questions and answers. 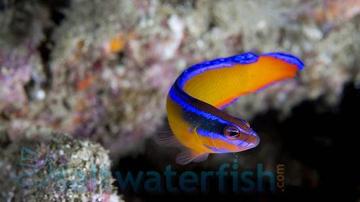