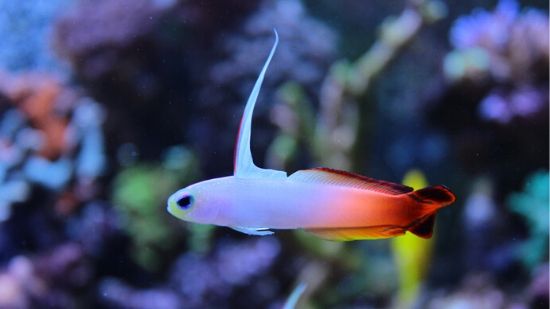 The Firefish Goby, Nemateleotris magnifica, also known as the Firefish or the Fire Dartfish, features a yellow head and a body that gradiates from white to red and a characteristic elongated first ray on the forward dorsal fin. It is a timid fish that is best suited for smaller reef tanks. The Firefish Goby contains a swim bladder which allows it to seem to hover in place. Like other Goby species, the Firefish Goby will often create its own burrow in the sand - sometimes these burrows are shared in a symbiotic relationship with the Pistol Shrimp. Therefore, a tank with plenty live rock, a sandy substrate, and a tightly sealed lid to prevent escapes is recommended. They will eat a carnivorous diet consisting of zooplankton and chopped meaty foods.
Reviewed by:   The Family Reef on 10/22/2014
Lost one on arrival, I enjoy watching them Several time a day they venture out from the rock and feed. Reviewed by:   audree barrett on 12/26/2014
Firefish were very pretty and healthy looking. Ordered 4 but only have one left. This one is eating well. Reviewed by:   Susan on 03/11/2015
what resilient little fish! hes in my nano and is so happy. he eats well and swims in and out of the rocks. everyone enjoys watching him Reviewed by:   laura mabe on 06/10/2015
A very pretty and friendly fish. He is much more visible in my tank than I thought he'd be, swimming around with his tank mates! Reviewed by:   Lisa on 07/03/2015
I ordered 2 which was a mistake for a 37gal cube. They started fighting after an hour in the tank. Next morning 1 was missing and the other showed no signs of damage. Both fish were healthy and beautiful. Reviewed by:   Michael Murphy on 02/05/2016
Shipped fast. Acclimated for 30 mins and fish is happy. very healthy and strong. i would suggest buying the biggest one even though it costs more. Totally worth it save time and money. Reviewed by:   Daniel Luu on 02/12/2016
Bought two of these and one of the purplish Firefish, lost one of these after about 2 days. When I say lost I mean vanished, it was the biggest but I can only see about 60% of either overflow. So there maybe hope, I did find a jaw fish in first section of my sump once. All is well otherwise, whole order was healthy on arrival. Reviewed by:   JD on 04/28/2016
Purchased two of these little cuties. I already had two that I purchased from Saltwaterfish two years ago. They all swim around together happy as can be. Reviewed by:   Lori Close on 11/29/2016
Was very shy at first and would hide in the rocks. In a week he has become much more social and is a beautiful addition to my nano. Reviewed by:   Debi Bush on 04/06/2017
Beautiful firefish! was in hiding the first few days home but has been out ever since. great eater! all the fish I get from saltwater eat RIGHT AWAY! Reviewed by:   Marissa L on 06/11/2017
What can I say it's a pretty fish. It Likes to hide but I get a kick out of seeing it pop up and move around. A must have I would say. Reviewed by:   Goldenclaw on 07/31/2017