The Blue Spot Puffer, Canthigaster papau, also known as the Hawaiian Blue Puffer or the Blue Spotted Sharpnose, has a winning personality and is a great fish for a fish-only tank. Its body is covered in brilliant blue dots. It is sexually dimorphic, meaning males have conspicuous points in the middle of the back, and over the position of the gill opening - a feature that females lack. The Blue Spot Puffer produces a toxin, which is known as tetradotoxin, in the skin and viscera that makes them unpalatable to most fish. It acclimatizes quickly to an aquarium life, and needs lot of hiding places with rocks and crevices. The Blue Spot Puffer is not considered reef safe because it nips at corals and has the ability to poison areas of the tank. It should be kept in fish only aquarium, and is highly recommended not to add multiple inhabitants in the same tank. The Hawaiian Blue Puffer will feed largely on red algae, green algae, and coralline algae as well as most carnivorous preparations. The Blue Spot Puffer should never be held or exposed outside of the water as it can be damaging to the fish.

Currently Blue Spot Puffer - Central Pacific does not have any reviews.

Currently Blue Spot Puffer - Central Pacific does not have any questions and answers. 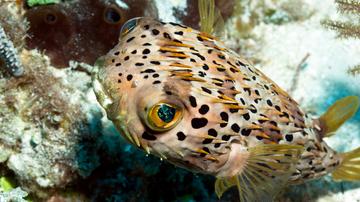 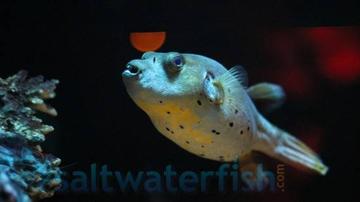