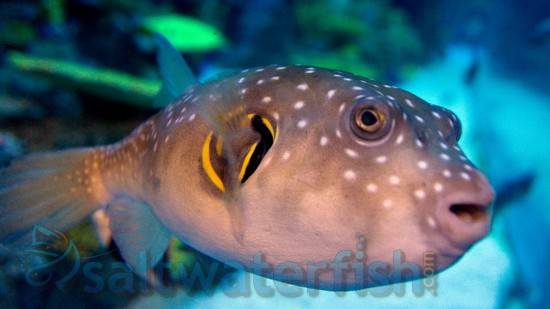 You will receive at least
96 reef rewards points
if you buy any item in this page.

The Stars and Stripes Puffer is commonly referred to as the Whitespotted Pufferfish, or Hispid Pufferfish. It is named appropriately because of its unusual markings of stripes over the top of the body and the spots on its underside making a very attractive and striking pattern. It also features a beak-like mouth that has teeth in both upper jaw as well as lower jaw, is fused into two plates. Like all other puffers, it can also inflate its body with water or air to intimidate predators. Once the Stars and Stripes Puffer inflates its body, it would appear twice its original size so that the predator can not even engulf it. Be sure to provide plenty of live rock as well as offer hard shelled Shrimps often to keep teeth worn down or be sure to trim teeth as needed. Using a container with water as opposed to a net when removing or transferring any Pufferfish is crucial to avoid ingestion of air.
The Stars and Stripes Puffer should not be exposed to air while handling, as the ingested air is too tough to expel and makes it difficult to survive. Since the Stars and Stripes Puffer may eat invertebrates found in a reef tank, it is not well suited to the reef aquarium. It feeds on a variety of foods including algae, coral, sponges, starfish, mollusks, anemones, urchins and other invertebrates. The Stars and Stripes Puffer is nocturnal hunter just like other puffers, and would nip at slow-moving fish and long-finned fish, but is not aggressive with others in its own family.

Currently Stars and Stripes Puffer does not have any reviews.

Currently Stars and Stripes Puffer does not have any questions and answers. 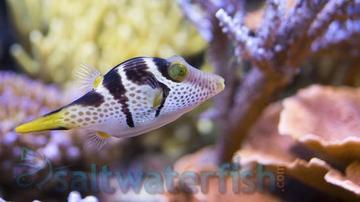 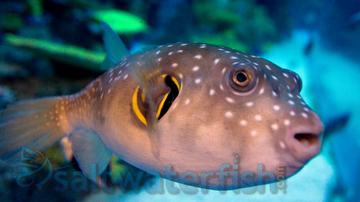 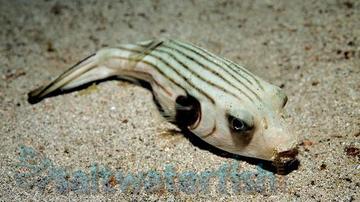