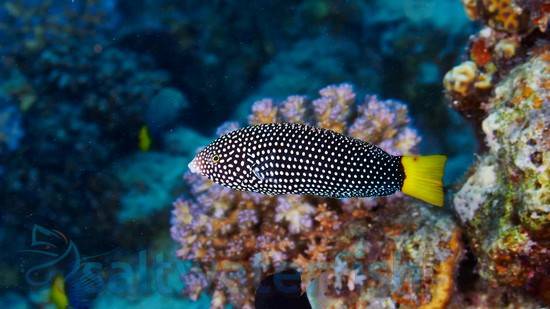 The Yellowtail Tamarin Wrasse, Anampses meleagrides, is also known as the Yellow Tail Tamarin, the Yellowtail Wrasse, and the Spotted Wrasse. It is a rare and unique wrasse for its black and white spotted body and distinct yellow tail.
The Yellowtail Tamarin Wrasse can be difficult to keep in the home aquarium for its high level of maintaining and attention required. Additionally, they cannot be kept with Batfish, Pipefish, Sea Horses, and Psuedochromis and caution should be had when pairing with Angelfish, Frogfish, Hawkfish, Hogfish, and Lionfish.
The aquarium should have corals or plenty of rocks since the Yellowtail Wrasse eat small invertebrates that grow on these live rocks. The Yellowtail Wrasse might refuse eating initially in captivity, but once it starts eating, its diet includes live, small feeder shrimps (brine, mysid) and finely chopped marine meats. The Yellowtail Wrasse grows up to 9 inches and should be kept in a tank not less than 60 gallons with plenty of place to swim and hide.