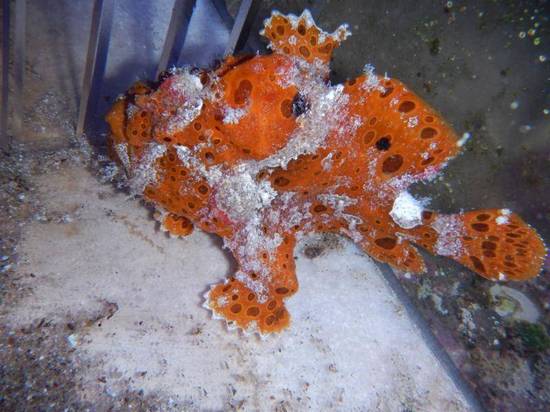 The Wartskin Angler, Antennarius maculatus, also known as the Warty Frogfish, or Wartskin Frogfish, is a well camouflaged frogfish resembling a piece of coral or rock. Wartskin Anglers can be found in a myriad of colors including white, maroon, brown, yellow, and purple. The Angler also has an interesting ability to blend in with its surroundings, similar to that of a chameleon, making the fish a unique addition to any reef tank. Wartskin Anglers thrive well in most reef tanks, can reach a size of 6 inches requiring a minimum of 40 gallons, and some rock or coral for it to perch. The Angler feeds primarily on small feeder fish or feeder shrimp, and  should also consist of meaty table seafood such as shrimp and scallops that can be offered on a feeder stick. It is sometimes necessary to wean this fish onto a captive diet, but patiently offering meaty chunks of seafood in front of the anglerfish with a little action or wiggle should entice the fish to eat.The Wartskin Angler feeds using its unique spinal appendage called an illicium. The illicium functions as bait enticing other fish to investigate. The Wartskin Angler then uses its predatory instincts and pounces on its prey.&nbsp;  It will thrive in a temperature range of  72-78?? F and a pH of 8.1-8.4.

This particular specimen is labeled "super" as it is our most ornately patterned and decorated example of a Wartskin Angler. These are the most spectacular specimens.