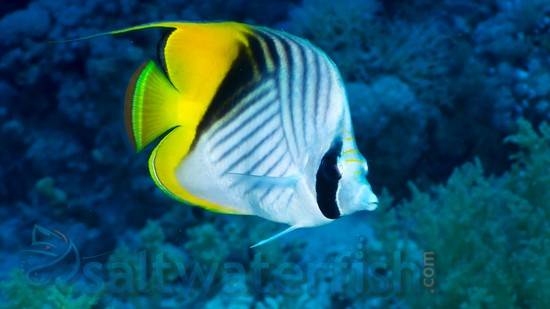 The Threadfin Butterflyfish, Chaetodon auriga, is also known as the Auriga Butterflyfish,  Cross-stripe Butterfly, Whip Butterflyfish, Threadfin Coralfish, Diagonal Butterflyfish, and Yellow butterflyfish.
Their body is a bright pearly white with black striping and a bright yellow backside.
It is not really considered reef safe, since it is mostly found foraging among the coral rubble and might disturb the coral's tips. It has also been known to tear pieces off its invertebrate prey, especially soft corals, stony coral polyps,  worms, anemones, and hard corals. These fish are one of the best looking all around butterflyfish and does quite well in a fish only community environment. They get along with most other marine fishes, basically just ignoring them. Yet they are one of the more aggressive butterflyfish and will often chase con specifics and others with a similar color pattern and shape, therefor should not be housed with other Butterflyfish. The Threadfin Butterfly is an omnivore and should be fed a diet that consists of meaty foods such as live or frozen mysis shrimp, brine shrimp, and herbivore preparations, like nori, spirulina and filamentous algae.  The Threadfin Butterfly can reach up to 8 inches, and should be kept in a tank no less than  100 gallons.  It requires a thick sand bed, and a tank with plenty of live rock, creating many caves for hiding places along with plenty of swimming space. If you wish to keep a group then we advise you to give them a plenty of space with a larger, and a cleverly decorated aquarium, and introduce all of them at a time. The Threadfin Butterflyfish is quite hardy and resistant to diseases, and readily adapts well into aquarium life that makes it a great choice for any beginner. The Threadfin Butterflyfish will thrive in a temperature range of  72-78?? F and a pH of 8.1-8.4.