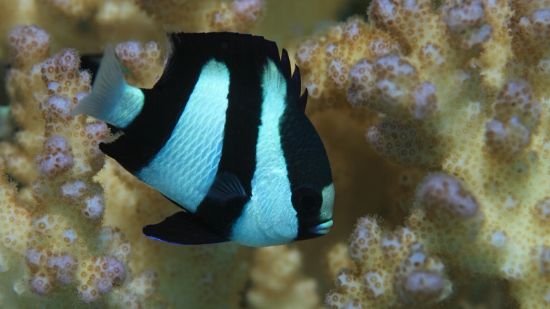 The Three Stripe Damsel, Dascyllus aruanus, also known as the 3 Stripe Damsel, are often found in the wild around staghor Acropora thickets in large numbers. As juveniles, the Three Stripe Damsel will sometimes live in harmony with sea anemones but as they mature will grow away from this symbiotic relationship. The Three Stripe Damsel's name gives away its primary aesthetic feature: three thick black vertical stripes through a slick white body. It has black pelvic fins, a pale caudal fin, and translucent pectoral fins. The Three Stripe Damsel is very easy to care for. As it matures it may become territorial but this can be deterred by adding the Three Stripe Damsel to the tank last. They do best in tanks with plenty of live rock as they will spend much of their time in and around it. The Three Stripe Damsel eats an omnivorous diet consisting of algae, microscopic inverts, and zooplankton. Males are larger than females. Multiple Three Stripe Damsels can be kept but, if you want to keep more than one Damsel species in the same tank, it is best to ensure there is plenty of open swimming space and live rock allowing them places to hide. They are generally not compatible with overly aggressive fish or overly fragile fish.
These fella's are very cute when small but as they grow up they ARE bully's so if you have anything that is shy or smaller, you might want to think about it first. I have a blast with mine because he loves to torture me, he watches every move I make and does a "dipping dance" when he gets bored to entice me to "play" with him. I place my hand in the tank and he circles it and bumps me with his tail. They are very entertaining but not nice to smaller fish. Reviewed by:   joye cantrell on 05/15/2012
Very active and healthy. good for any tank. Reviewed by:   brian depriest on 08/02/2014
I don't want to say "bully". Just a small "hyperactive" guy. Best kept in pairs or 3's and 4's to keep each other busy. Reviewed by:   Mike Courtney on 12/13/2014
As usual, SWF does it best. Fish are beautiful, healthy and very active in my small reef (55 gal.) I also have 2 other reef tanks (125 gal. and 300 gal.) that SWF supplied the fish for. I recommend SWF highly. Plus, their customer service is great. If you have any problem with an order, they will take care of it ASAP. Reviewed by:   Ty Phillips on 03/12/2017