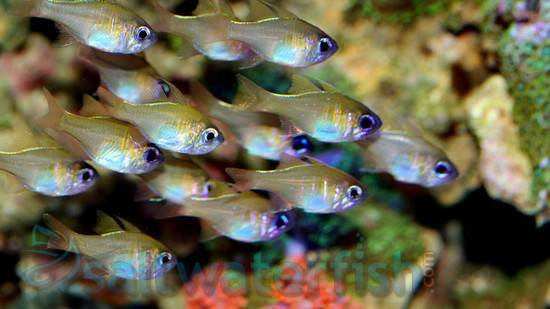 The Threadfin Cardinal, Apogon leptacanthus, also known as the Bluestreak Cardinalfish, has a semi-transparent yellowish silver color, with vertical iridescent blue lines on the face. Their body is also a different shape than the traditional Cardinalfish, being long and slender rather than short and taller.

The Threadfin Cardinal is a slower swimmer, and extremely peaceful in nature, and should be housed with other reef safe, and peaceful tank mates. Because of their timid nature, they are a great choice to house with Seahorses and Pipefish. They can grow to be about 2.5" fully mature, and should be kept in a tank with plenty of live rock or plants to offer hiding places during the day. The Threadfin Cardinal has a nocturnal living habit and will be most active during the night.

Since the Ruby Cardinal is very social, they do best in small groups or schools of odd numbers of 5 or more, as long as they are placed in an appropriate sized tank of no less than 30 gallons, and can be kept in a tank of 10 gallons individually. Larger tanks could allow for larger schools, and these Cardinalfish are most impressive in larger groups. Like many other schooling fish, the Threadfin Cardinal will form a strict hierarchy when kept in small groups within the aquarium. Although some species do use aggression to exert dominance, this member of the family Apogonidae does not. They are an excellent choice for beginner aquarists as they are active, friendly, hardy, easy to care for, and easily adapt to captive feeding.

Threadfin Cardinals are carnivorous, and should be fed a diet of vitamin enriched Brine or Mysis shrimp, along with other finely chopped meaty preparations. They may also eat smaller benthic inverts present in the tank. If you are finding the Cardinalfish is having difficulties eating, it can be best to offer food at night. They will thrive in a temperature range of 72 - 75??F and a pH of 8.1-8.4.