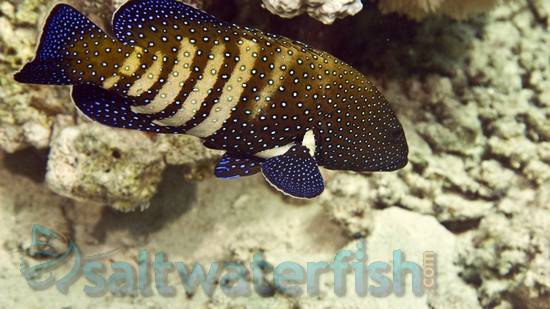 The Blue Spot Grouper (Cephalopholis argus), also known as the Peacock Hind, Argus Hind and Blue-Spotted Grouper is a beautiful and hardy, albeit very aggressive, fish from the Indo-Pacific Ocean, as well as the coast of Hawaii. Properly a sea bass from the family Serranidae, the Blue Spot Grouper feeds primarily on other fish in the wild, although it will also consume crustaceans; expect the same in your aquarium. For the large fish-only system with equally large fishes, the blue dot grouper is one of the more attractive members of the genus and should be given careful consideration. This fish appreciates low light environments with a couple of solidly constructed caves (these fish will dig). Only one blue dot grouper should be kept to a tank. A diet of meaty chunks of marine flesh (such as raw table shrimp) or a frozen food formulated for marine carnivores should be offered. While the blue spot grouper may appear shy on introduction, in short order, it will prove a personable, disease resistant, beautiful fish for the large fish-only (FOWLR) marine aquarium.

Love this Blue Spot Grouper! He is so beautiful and such an interesting personality! He doesn't bother anyone and has actually become friends with our yellow wrasse! They swim attached at the hip looking for food! He is a very mellow swimmer who loves swimming through the rock work to find new caves. He is a little hard to feed when competing with quicker eaters, I let a couple pellets sink in front of him and sink a few spirulina flakes! I highly recommend him, he is sweet, beautiful, and easy!

Currently Blue Spot Grouper does not have any questions and answers. 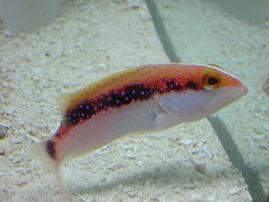