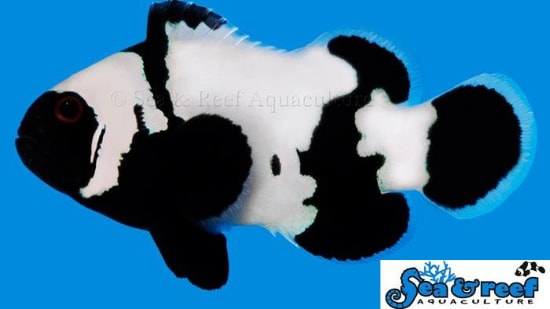 Snowflake Clownfish - Phantom, Amphiprion ocellaris, is an aquacultured variation of the snowflake ocellaris with a black body instead of orange featuring three curving white bands with black borders on the bands, fins and tail. The grading system evaluates the completion of patterns or bands on individual specimens. They are social and very peaceful with other species as well as other peaceful clownfish and can even be kept in a school if the tank is large enough. They are also very hardy, and a great choice for a beginner.
Clownfish are reef safe and can be kept with non aggressive invertebrates and corals, and most clowns will host an anemone present in the tank. Diet should include a variety of frozen and live mysis and brine shrimp as well as spirulina, marine algae, nori, and algae based foods, 2-3 times daily.