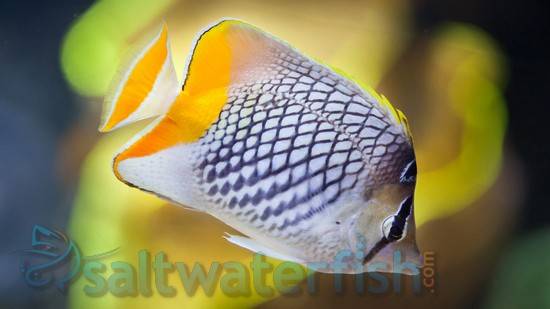 The Pearlscale Butterfly, Chaetodon xanthurus,  also known as the Crosshatch Butterfly, Yellowtail Butterfly, Netted Butterfly, Orange Butterfly, and Crowned Pearlscale Butterfly. Its body has black edged pearly scales that give it a cross-hatched or netted pattern overall. It is accented with a black eye bar to the front and a bright orange red on the rear. Despite its striking appearance this species is difficult to distinguish from some of its relatives. The very similar "look alike" are the popular Mertens Butterflyfish,  Chaetodon mertensii, and the Red Sea Chevron Butterflyfish (Red Pearlscale Butterflyfish), Chaetodon paucifasciatus. The Pearlscale Butterfly can grow to be 5.5 inches, and should be kept in a tank no less than 50 gallons if kept individually, and no less than 90 gallons if kept in a pair.  If keeping a pair, they should be added at the same time. The tank should be decorated with plenty of rocks  with many hiding places along with plenty of swimming space. It swims freely and usually spends a good deal of its time in the open water, moving in and out of crevices. The Pearlscale Butterfly is a peaceful, and should be kept with other peaceful species. They are not considered reef safe, as they can pick on Soft Coral Polyps, and sessile Invertebrates and Benthic Invertebrates. It is relatively safe with Stony Corals  and can be kept with some of the more noxious soft corals, as long as the reef tank is large, well stocked, and they are provided with a proper and nutritious diet. But are best kept in a FOWLR tank.  The Pearlscale Butterfly will eat a omnivorous diet consisting of vitamin enriched Brine and Mysis shrimp,chopped Shrimp, Squid, as well as Spirulina, and Sponge based frozen foods, and Japanese Nori. Feed it at least twice a day for it's continued health. This butterflyfish is moderately hardy and makes a good choice for an intermediate aquarist with some experience. They will thrive in a temperature range of 72- 81?? F and a pH of 8.1-8.4.
Very nice looking fish doing well in quarantine so far arrived looking in good health. Reviewed by:   lenny on 12/04/2016
Doing great so far! Only in main tank for a few days now and at first was chased by our saddleback butterfly, but now he's fit in quite comfortably. Eating well also. Reviewed by:   Shelley Turner on 07/01/2017