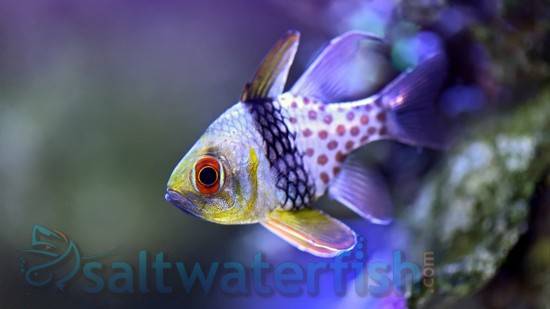 The Pajama Cardinal, Sphaeramia nematoptera, also known as the Polka Dot Cardinal or Spotted Cardinal, has an incredibly unique color and pattern on its entire body. Featuring a greenish yellow front half, divided by a black band in the middle of their body, followed by a spotted or polka dot dorsal region that is an off-white color with vibrant red-orange spots. At this price, this is one of the most colorful fish you can get in the aquarium trade.
The Pajama Cardinal is a slower swimmer, and extremely peaceful in nature, and should be housed with other reef safe, and peaceful tank mates. Because of their timid nature, they are a great choice to house with Seahorses and Pipefish. They can grow to be about 3.5" fully mature, and should be kept in a tank with plenty of live rock or plants to offer hiding places during the day. The Pajama Cardinal has a nocturnal living habit and will be most active during the night.
Since the Pajama Cardinal is very social, they do best in small groups or schools, in an appropriate sized tank of no less than 30 gallons for the school, and can be kept in a tank of 20 gallons individually. Larger tanks could allow for larger schools, and like many other schooling fish, the Pajama Cardinal will form a strict hierarchy when kept in small groups within the aquarium. Although some species do use aggression to exert dominance, this member of the family Apogonidae does not. They are an excellent choice for beginner aquarists as they are active, friendly, easy to care for, and easily adapt to captive feeding.
Pajama Cardinals are carnivorous, and should be fed a diet of vitamin enriched Brine or Mysis shrimp, along with other finely chopped meaty preparations. If you are finding the Cardinalfish is having difficulties eating, it can be best to feed the Pajama Cardinal at night. They will thrive in a temperature range of 72-78??F and a pH of 8.1-8.4.
I purchased one from you around 20+ years ago and he just passed in the last few months. I love your fishies! Reviewed by:   P Daniels on 10/25/2019