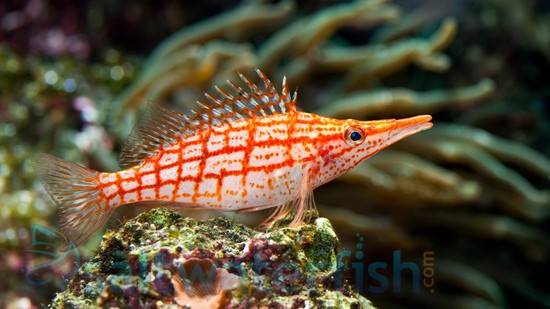 The Longnose Hawkfish, Oxycirrhites typus, features a characteristic long snout and a unique tuft of cirri found near the tips of its dorsal fins. The Longnose Hawkfish's body almost resembles a classic picnic blanket with its red and white checkerboard pattern. Caring for the Longnose Hawkfish requires some preparation. They thrive best in tanks of at least 30 gallons, with plenty of live rock hiding places and perches, and should always be introduced last into your tank to help curb territorial aggression. The Longnose Hawk is a voracious predator and will snack on small inverts or fishes so tank mates should be selected carefully. They are also prone to harm from strong stinging corals and anemones. The Longnose Hawk eats a carnivorous diet of live or frozen meaty foods, often supplemented by their own scavenging of microscopic inverts in the tank. Males are often larger than females.
Reviewed by:   Mary Stone on 10/07/2014
Received two healthy hawkfish today with vibrant color. Love it. Wouldn't regret getting a pair. Reviewed by:   Thao nguyen on 04/09/2015