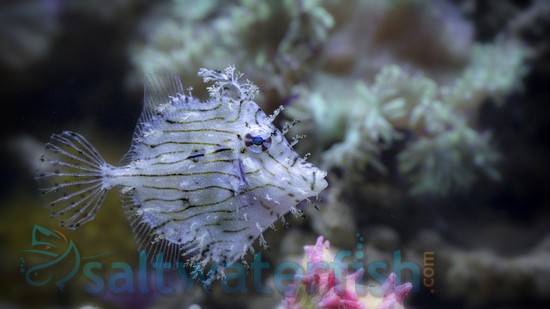 The Leafy Filefish, Chaetodermis penicilligera, also known as the Tassle Filefish or Frickly Leatherjacket Filefish, is camouflaged by its light body and dark horizontal stripes. It is best to keep in a tank of not less than 70 gallon along with many rocks and weedy areas. The Leafy Filefish is a peaceful fish that does not bother any tank mates, except its own family members. It feeds on a diet of meaty foods including chopped shrimp, squid, clams, fish, and frozen algae and vitamin enriched foods. The Leafy Filefish should be fed twice a day for its continued good health. It thrives well in a temperature range of 72-78 degrees Fahrenheit and pH of 8.1-8.4. Since the Leafy Filefish eats most of the invertebrates present in the tank, it is not considered a reef safe. It has small terminal mouths that have specialized incisor teeth on the upper jaw which helps pierce its prey. Due to its small fins, the Leafy Filefish is not a very good swimmer, instead it confines to a sluggish gait. It is best to keep plenty of hiding spots in the aquarium, so that when threatened it can retreat to crevices in the reef. The Leafy Filefish is pelagic and grows up to 12 inches. It also prefers live rock for grazing that is why it is necessary to add live rocks that encourage the growth of natural algae.

Currently Leafy Filefish does not have any questions and answers. 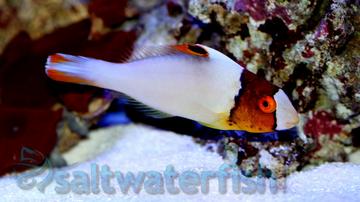