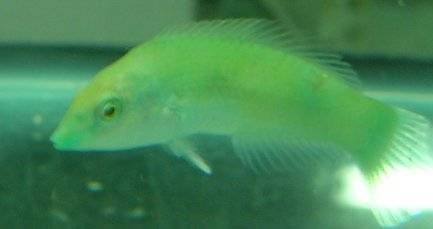 The Green Wrasse, Halichoeres chloropterus, is also known as the Pastel Green Wrasse or Green Wrasse. Its pastel green body with beautiful markings makes a great addition to any reef tank. The Green Wrasse is an unusual colored fish, and is very hardy and easy to care for, which makes it suitable for a marine aquarium and also for a beginner saltwaterfish aquarist.
The Green Coris Wrasse can grow to be 8 inches, and should be kept in an aquarium no lees than 75 gallons. A thick sandy substrate is suggested, because when frightened it generally hides itself in the sand, and will spend most of its early introduction hiding in the sand. The aquarium should also have plenty of live rock to create hiding places, and a tight fitting lid, as this Wrasse is know for jumping. It is widely known for its ability to protect Corals and Clams by eating Fireworms, Flatworms and Pyramidillid Snails, as well as Feather Dusters and Tubeworms.
It is easy to feed the Green Wrasse and it generally accepts any types of foods that include marine flake food, meaty food, and frozen food and chopped sea food. The Green Coris Wrasse should be fed a varying carnivorous diet consisting vitamin enriched Mysis and Brine Shrimp, as well as chopped meaty preparations, such as Krill, raw table Shrimp, Squid, Clam and Mussel. The Green Wrasse thrives well in a temperature range of 72-78°and a pH of 8.1-8.4.