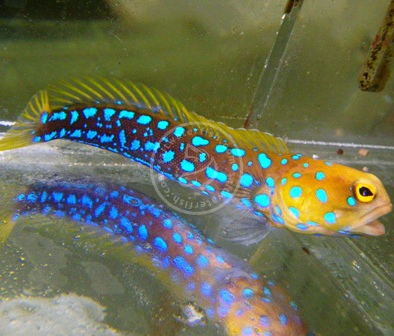 The Blue Spotted Jawfish, Opistognathus rosenblatti, is one of the most beautiful goby species available. It has electric-blue stripes over a yellow body with an elegant yellow dorsal fin. The slender Blue Spotted Jawfish will move sand from the substrate and dig a burrowing hole to live within. Often times this fish will use a shell as it's door to the hole. Their head will pop out of their hole looking for food and predators. Upon seeing food they will float out of their hole in a standing motion to grab the food and then rush back into their home.. More than one Blue Spotted Jawfish can be kept in the same tank. The Blue Spotted Jawfish likes to jump, so a tight fitting lid is suggested. As well, some of the Goby species are known to share their burrows with Pistol Shrimp. Most Gobies have cupped ventral fins that nearly join just below their gill plates that serve as perching mechanisms so the Goby can always be on the lookout in a resting position.
By far my favorite fish. I had to empty a display into my qt tank so that it could be qt'd in a tank with sand in it. Awesome colors and awesome personality. Been here a week and no signs of parasite or illness. Reviewed by:   Josh Cutler on 02/19/2017
I have this goby for about a month now. I was surprised to find how active it is (unlike other gobies). It swims alot during the day. It opens its mouth when it senses danger ie when another fish swims close to it. The negative is the cost but I find this fish a joy to have in my tank. Reviewed by:   Esther Murphy on 02/15/2018