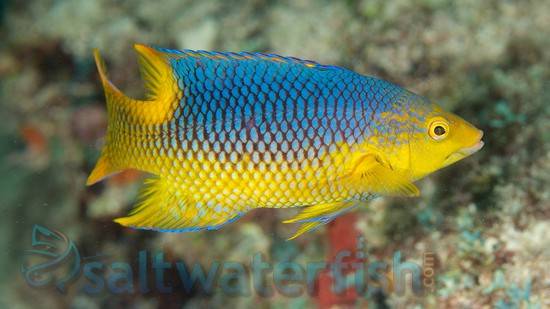 The Spanish Hogfish, Bodianus rufus, features a patch of blue highlight on a golden-yellow body. As a juvenile, It can be a beneficial cleaning fish for your tank, since it  pick parasites off of its tank mates. However, they will grow out of this behavior as an adult. They are also diurnal which means they are active during the day, and can be found burying themselves in the sand bed during at night. The Spanish Hogfish can grow to be 12" and requires a tank not less than 150 gallons.
The Spanish Hogfish is a very hardy tropical reef fish species that will do well in larger aquariums with strong filtration and good water movement. It is very active swimmer that appreciates adequate space in the aquarium in which it swims along with small to moderate amounts of live rock.
It is aggressive towards smaller, peaceful fish that are easily bullied, and will nip at and eat smaller inverts like Sea Urchins, Hermit Crabs, Worms, Clams and Snails, and is not considered safe for a reef tank or environment. Once acclimated, the Spanish Hogfish is very hardy and easy to keep and makes a very good choice for a beginner.
The Spanish Hogfish is carnivorous and should be fed a diet that includes Mysis and Brine Shrimp either frozen or live along with a wide variety of other vitamin enriched frozen meaty foods. The Spanish Hogfish should not be kept with crustaceans, invertebrates or small fish unless they are intended as food items. It thrives well in a temperature range of 72-78° F and pH of 8.1-8.4.