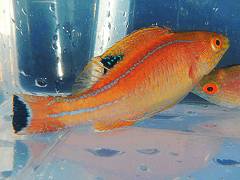 The Rose Band Fairy Wrasse, Cirrhilabrus roseafascia, also known as Cirrhilabrus roseofasciatus, Red Striped Fairy Wrasse, and the Rose-Band Fairy Wrasse, has a beautiful multicolored body consisting of a pink and purple body, yellow eyes, a yellow dorsal fin with a red stripe, blue pectoral fins, and a blue and white anal fin. Females are a similar pattern and color though with more subtle and muted colors. The Rose Band Fairy Wrasse is one of the least common species of fairy wrasse on the aquarium market as it is only collected from a few locations in the Pacific and only first identified in 1982. Because this is a deepwater species, they actually may do better in a tank with dimmer lights.
Similar to most wrasses, the Rose Band Fairy Wrasse should be kept in a tank with a nice sandy substrate as well as plentiful amounts of live rock allowing the wrasse to hide and explore. It is important that the tank has a tightly secured lid to prevent potential escapes. They eat a carnivorous diet consisting of zooplankton, brine and mysis shrimp, copepods as well as quality pellet and flake food. The Rose Band Fairy Wrasse should be fed several times a day. This is a reef-safe species with most fish including other wrasses, but should not be kept with members of its own species unless in a 150 gallon or more tank. It should not be paired with aggressive and territorial fish.
NOTE: the picture is of a Sunset Fairy Wrasse. Cirrhilabrus roseafascia exhibits a pinker hue with a similar body shape.