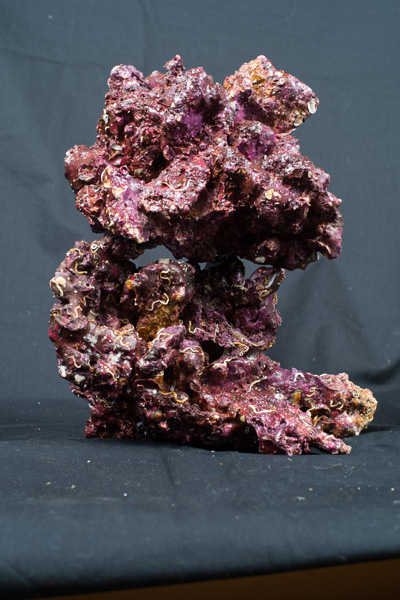 Real Reef Rock; Extra Large - 55 lb box
Real Reef Rock is artificially made in the US from 100% organic natural marine ingredients. The ingredients are not taken from the ocean and as a result there is zero environmental impact to the world's coral reefs. It is grown in the United States in closed systems further avoiding contact with oceans like traditional mariculture techniques.
Often, Real Reef Rock is said to look better than "wild" live rock. Real Reef Rock's building blocks are the very same of live rock in the wild. It is porous, shapely, and often a combo of natural shades of purple, pink, and red resembling coralline encrusted rock. Live other live rocks, the Real Reef Rock is bioactive, but it is bereft of nuisance hitchhikers found in the wild.
How is Real Reef Rock made?
Real Reef Rock is composed of 100% natural and eco-friendly mineral aggregates and sand. The rock is high in calcium carbonate (around 85%) and filled out with trace elements like magnesium, strontium, and iron.
Every piece of rock is uniquely beautiful. No two pieces are ever the same. No synthetic materials like glues or epoxies are ever used. The pieces of rock are handmade by artisan craftsmen in the US. The rock is cured for a minimum of 12 weeks, placed into a saltwater grow-out for a minimum 12 weeks where it becomes bioactive and it is prepared and shipped directly from that grow-out.