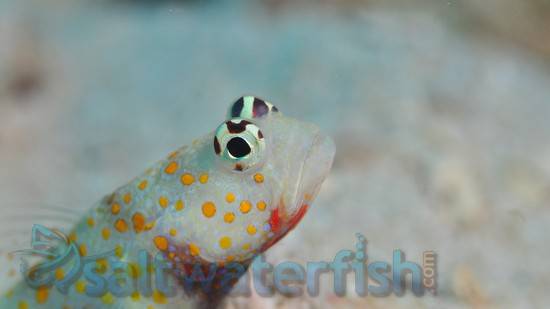 The Orange Spotted Shrimpgoby, Amblyeleotris guttata, also known as the Orange Spot, and the Spotted Prawn Goby. As a small fish, it is best housed in a smaller tank with peaceful tank mates. They thrive in tanks with plenty of live rock, a deep sandy substrate, and a tightly sealed lid to prevent escape. They will build a burrow under the sand bed. The Orange Spotted Shrimpgoby can form a symbiotic relationship with Alpheus shrimp. They do well in small groups but can also thrive individually. The Orange Spotted Shrimpgoby will eat a carnivorous diet and are known to spawn successfully in a an aquarium.
Arrived healthy with great color. Took a couple days to acclimate to his new environment and start eating mysis. Two weeks in and seems to be settling in well. Adorable fish who likes to "hop" around the tank. Reviewed by:   David S on 06/05/2017