Naoko's Fairy Wrasse, Cirrhilabrus naokoae, has a reddish body with a long yellow horizontal stripe, and silvery white underbelly. Naoko's Fairy Wrasse is a rare species in the aquarium hobby as it was only identified in 2009. The males are considered more flashy and exuberant than the more subtly colored females. Currently, Naoko's Fairy Wrasse is found only in the waters of Indonesia. Like most other wrasses, Naoko's Fairy Wrasse should be housed in a tank with plenty of live rockwork providing hiding places, have a sandy substrate, and have a tightly secured lid to prevent escapes. They are great reef dwellers but should not be kept with miniature inverts.

I was concerned when I didnt see the fish for a day or so. But now that hes acclimatised, he's cautiously swimming close to his hiding spot/a live rock. He is beautiful; just wish he isnt as timid.

Got a fantastic fish for my nano at a fantastic price. Arrived in perfect health and is feeding nicely. So beautiful too.

The colors on this fish is as pictured; very vibrant and vivid. A couple of times I was fooled into thinking he died. He sleeps upright amongst the artificial reefs. It's an easy care fish and I can recommend this fish if you'd like colorful fish in your tank, like I do

Currently Naoko's Fairy Wrasse: Male does not have any questions and answers. 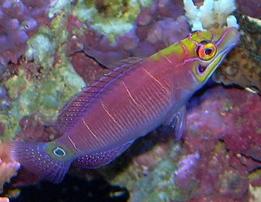