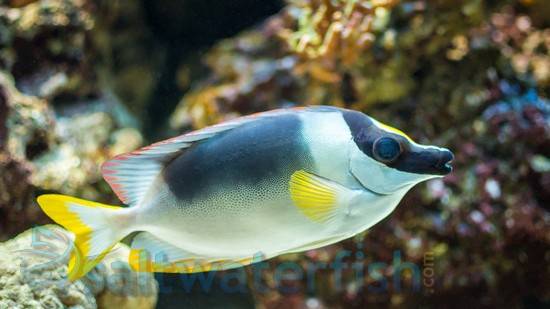 The Magnificent Foxface, Siganus magnifica, lives up to its name with its beautiful black striped "mask" over its face and its regal attitude and appearance. They are easy to care for because they are hardy and adaptable to a variety of different water conditions. The Magnficent Foxface does possess venmous dorsal spines, so care should be taken if handling to avoid a sting. If they do get caught in a net while transferring, gently move the net back and forth until the foxface relaxes its fins. The Magnificent Foxface is best kept in tanks of at least 70 gallons, with plenty of live rock hiding and algae, and either singly or in a pair. They will eat primarily a herbivorous diet consisting of algal based foods, and quality flake foods. It is generally reef safe but may nip on some corals if it is not well-fed. It can be wise to use quarantine measures before adding the Magnificent Foxface to your tank. Sometimes during acclimation, the foxface will show major discoloration and spotting. Rest assured as this is no indication of its health, only that it is stressed.