The Flameback Angelfish,&nbsp;<i>Centropyge acanthops</i>, also known as the African Pygmy Angelfish, and Orangeback Angel, features an orange and yellow dorsal fin, an orange eye, and a deep blue body with a clear tail. As one of the smallest members of the Centropyge family, the Flameback Angel is not necessarily reef safe as it picks on coral mucous and small sessile inverts. The Flameback Angel is a hardy fish, and has an omnivorous diet of natural algae and brine and mysis shrimp. They are an egg-scattering species and can be bred in captivity. They require a tank of at least 50 gallons, plenty of live rock and open swimming space. It is semi-aggressive and will defend their territory, but usually will not bother other tank mates. They may nip at some soft and polyp corals.  Overall, the Flameback Angel is a beautiful, relatively peaceful fish that will go great in most home aquariums.&nbsp; It will thrive at tempertures from   72 - 78?? F and a pH of 8.1-8.4.

Currently Flameback Angelfish - Africa does not have any reviews.

Currently Flameback Angelfish - Africa does not have any questions and answers. 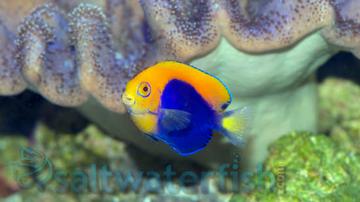