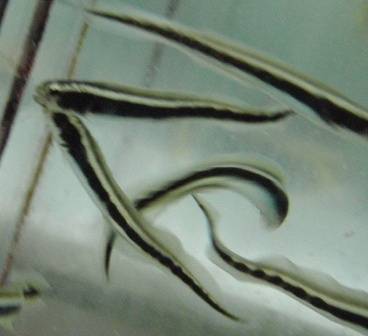 The Engineer Goby, Pholidychtys luecotaenia, also known as the Convict Worm Goby, Pacific Neon Goby, Convict Worm Blenny, features a long skinny body with varying body marks through different periods of its life. Generally, the Engineer Goby has a black body with a white horizontal stripe. Like other similar species, the Engineer Goby will often create its own burrow in the sand - sometimes these burrows are shared in a symbiotic relationship with the Pistol Shrimp. Therefore, a tank with plenty live rock, a sandy substrate, and a tightly sealed lid to prevent escapes is recommended. The Engineer Goby is disease resistant. They eat a carnivorous diet consisting of frozen meaty foods and may sometimes nibble on small fish and inverts. They can breed successfully in captivity with a spawning frequency of 8-28 days. Able to be kept in pairs or singly, the Engineer Goby is a great community fish for its unique beauty and hardiness.