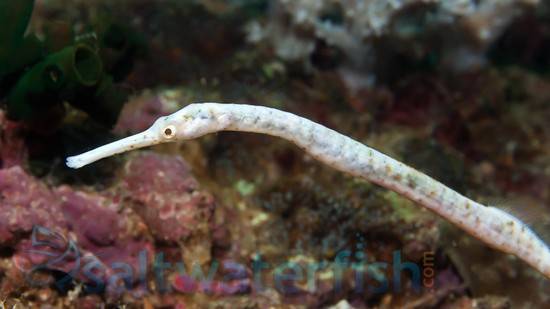 The Pipefish will require a mature aquarium with plenty of copepods for feeding. Live brine shrimp can also be used to offer some variety. As the Pipefish establishes itself it will start to accept frozen food made up of copepods, brine shrimp and mysis.

The Dragon Pipefish Corythoichthys intestinalis is a slow moving peaceful fish and will usually keep close to the sand or rock work as it moves around. Because of it's peaceful nature the Dragon Pipefish are good tank mates in a Seahorse aquarium setup.

This fish arrived in good shape and appears to be doing well. I haven't seen it eat, but it always appears to be foraging for food.

Currently Dragon (Red Bug Eater) Pipefish - Central Pacific does not have any questions and answers.