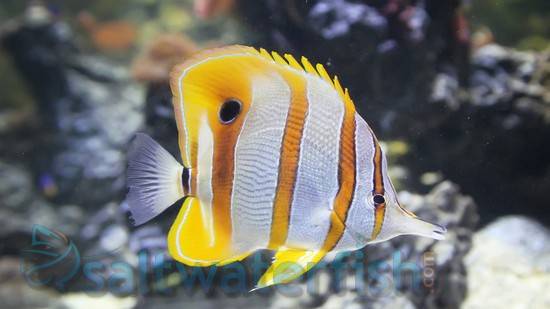 The Copperband Butterfly, Chelmon rostratus,  also known as the Beaked Butterflyfish, Beaked Coralfish, or Orange Stripe Butterfly. The Copperband Butterfly has an elegant silver sheen bisected by several luminescent copper bands  with a disc-like shaped body that is laterally compressed and it has a long protruding snout tipped with a small mouth, and a small black dot on the end of its dorsal fin. This Butterflyfish is exotic in appearance yet surprisingly affordable. It is without a doubt a staple of saltwater fish aquariums in the United States. The Copperband Butterfly can reach a size of 8 inches, and should be kept in a tank no less than  70 gallons if kept individually, and no less than 125 gallons if kept in a pair. If keeping a pair, it is suggested to add them both at the same time to avoid aggression. They can also be kept in a small group, in a larger system.  The tank should also have plenty of open space for swimming, and plenty of live rock, and caves for the Copperband to retreat to if it feels threatened. The Copperband Butterfly is not considered reef safe, as it will nip at most sessile invertebrates, benthic invertebrates from small crevices, most likely feeding heavily on tubeworms and small crustaceans, coral polyps, polychaete worms, feather dusters,  but is a great choice for controlling  pesky Aiptasia.  They are also peaceful in nature, and should not be introduced into a tank with aggressive tank mates, and unless held in a large tank, should not be housed with aggressive Tangs, Butterflyfish,  or Angelfish. The small size of the Copperband Butterfly's mouth makes its feeding habits slightly complicated. They can only grab small particles of food. They should be fed mostly a carnivorous diet, consisting of  finely chopped Mysis and Brine shrimp, and other finely chopped meaty preparations. Vegetables like lettuce or Japanese Nori (Asakusa-nori) may also be favored.   If at first they are having difficulty eating, they may be enticed to eat live foods offered in a way that simulates their natural feeding environment. Bloodworms pushed into rocks and corals, or live clams and black mussels with their shells cracked open have been reported as successful for these difficult eaters.  At first, they are not aggressive feeders so do not be wary if they are not feeding immediately. Further, the Copperband Butterfly, and other butterfly species, are especially susceptible to marine disease, so it is highly recommended that you introduce it into your main tank using quarantine procedures. They will thrive in a temperature range of 73 - 81?? F and a pH of 8.1-8.4.
We love our new Copperband Butterfly fish! Our package arrived and our new tank addition was happy and healthy. Easy acclimation instructions were included. Beautiful fish! Reviewed by:   Sheri Ikner on 10/16/2016