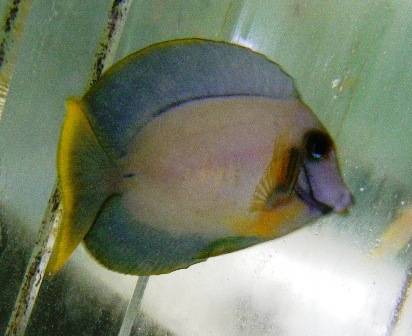 The Chocolate Tang, Acanthurus pyroferus, also known as the Yellow Mimic Tang, Mimic Lemon Peel Tang, and Mimic Surgeon, exhibits a bright yellow circular body as a juvenile and as an adult changes its color to mimic certain pygmy angel species employing camouflage as protection. Its spiny tail can also be used as a defense mechanism. Unlike other tangs, the Chocolate Tang is best kept as a solitary individual. They are hardy, easy to care for, peaceful, and only requires some live rock and free swimming space. They will feed primarily on an algae-based diet. The Chocolate Tang is reef safe and a great beginner tang.