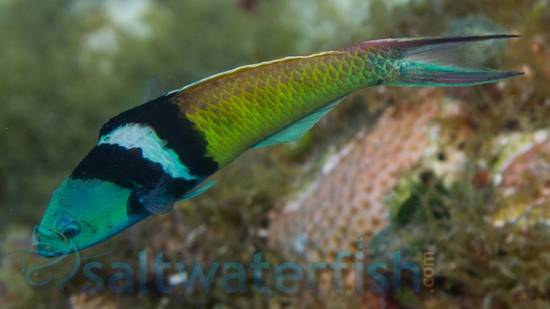 The Bluehead Wrasse, Thalassoma bifasciatum, is far more beautiful than its name might indicate. While featuring a distinctive blue head, the Bluehead Wrasse also has a deep blue/violet body punctuated by stark black stripes, neon blue scales, and a faint gold trim on its dorsal fin. Sometimes, they also features a light pink underside. Juveniles features a yellow color scheme while females and males differ slightly on boldness of the color blue.
The Bluehead Wrasse is best kept in a tank with plenty of live rock hiding places, a sandy substrate, and a tightly sealed lid to prevent escapes. They should be housed with large tank mates as they can be gregarious. As natural hunters, the Bluehead Wrasse will seek small inverts for its carnivorous diet. They won't touch corals and will sometimes even eat pesky bristleworms.