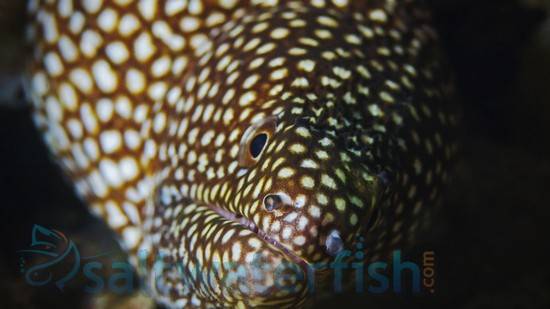 The Whitemouth Eel, Gymnothorax meleagris, also goes by the Whitemouth Moray Eel, Turkey Moray Eel, White-mouth Moray, and Guineafowl Moray. The Whitemouth Eel has a dark brown/black body with scattered dark-bordered white spots throughout. The interior of its mouth is a bright white which gives the moray its name. They are found mostly in both the Indian and Pacific Oceans spending most of their time hiding in reef rock at depths of up to 120 feet. The Whitemouth Eel is one of the more rare species of moray eels found in the wild and even less common in the aquarium trade.
Whitemouth Eel Care Facts