The Springeri Dottyback is jet-black with bright neon blue markings on its face. These small fish have a slender body that allows them to jet in and out of rockwork at a fast pace. They should be provided ample rockwork. Only one should be kept per tank.Dottybacks are a group of small, colorful basslet-like fish that inhabit the crevices and small caves of the coral reef. Dottybacks can be kept in smaller aquariums, although larger tanks with plenty of live rock are preferable. They are territorial and will defend the area they have claimed as home quite aggressively. Housing several dottybacks depends on the size of the tank and the amount of hiding places available. There is some success with introducing several dottybacks at the same time, this allows each to establish a territory to defend, without giving an advantage to one. Once a dottyback has becomes accustomed to a tank, it is usually difficult to get another introduced without being attacked. Dottybacks vary species by species in aggressiveness, and care should be taken when deciding which to introduce to an aquarium community. The family of Dottybacks are well known for their elusive nature. These fish tend to stay within their crevice or cave until it is time to feed. Their color is usually quite dramatic and they are capable of changing their sex. When eggs are laid the males are known to pick up the eggs with their mouths in order to keep them aerated.

What a beautiful Fish! The images on the website do not do this marine life justice. The Springeri Pseudochromis - Captive Bred was hungry and ate right away.

Currently Springeri Pseudochromis - Captive Bred does not have any questions and answers. 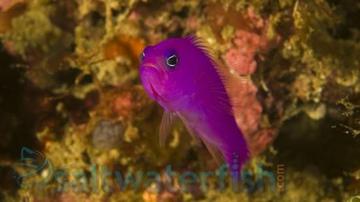 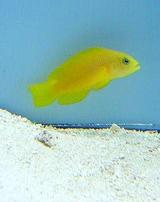