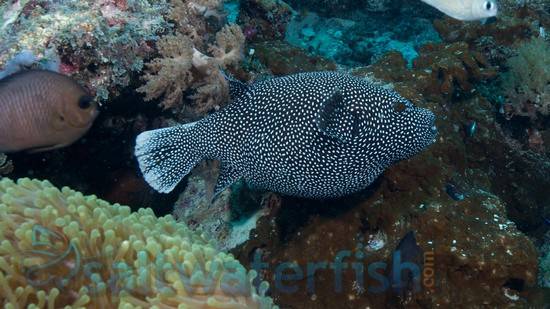 You will receive at least
1237 reef rewards points
if you buy any item in this page.

The Sapo Puffer, Arothron meleagris, goes by many common names including the Guineafowl Puffer, Arothron Puffer, Golden Puffer, Spotted Puffer, and Guinea Fowl Puffer.  The Sapo Puffer has two distinct forms and colorations which change as they mature. It begins with a deep blue/black body with scattered white spots. As it gets older it begins to morph into a lustrous golden color. These changes, however, usually only occur when the Sapo Puffer is in the wild, such noticeable color morphing is rare in the aquarium. The Sapo Puffer is best kept as a solitary individual, though it will not act aggressively towards other fish or even other puffers. Sometimes the Sapo Puffer likes to have a large cave or overhang where is can hide in your tank. The Sapo Puffer will eat many things with its hard beak-like mouth including small invertebrates, so do not pair the Sapo Puffer with these small inverts. As a voracious eater the Sapo Puffer will take most prepared meaty foods including brine and mysis shrimp as well as herbivorous diets. Sapo Puffers, like other puffer species, should not be handled or transferred using nets as they will puff up and get caught and become agitated and stressed. Rather, they should be transferred using a container that will not upset the fish. The Sapo Puffer is best kept in a fish-only tank of at least 125 gallons.

Currently Sapo Puffer does not have any reviews.

Currently Sapo Puffer does not have any questions and answers.