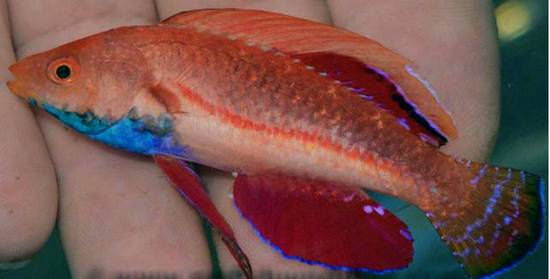 The Sailfin Fairy Wrasse, Cirrhilabrus sp.,  The Sailfin Fairy Wrasse has a large and flowing dorsal fin that is mostly red with purple accents, two large red pectoral fins, a large red caudal fin lined in purple, and a beautiful purple-striped red anal fin. On top of these beautiful colors, the Sailfin Fairy Tang has a deep electric blue directly under its chin.
The Sailfin Fairy Wrasse should be kept in a tank with a nice sandy substrate as well as plenty  of live rock allowing the wrasse to hide and explore. It is important that the tank has a tight lid to prevent potential escapes.
Always like doing business with this company( though it had been a while) the Wrasse came in beautiful and perfect, started eating food almost immediately, would definitely recommend. Reviewed by:   Chris on 03/27/2017