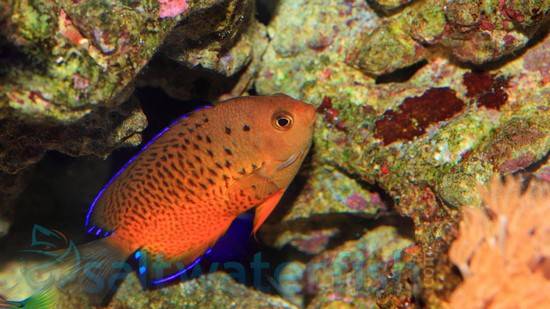 The Rusty Angelfish, Centropyge ferrugatus, features a rust-colored golden/orange body with irregularly shaped black dots in a vertical sripped pattern and brilliant neon blue edging on its fins. Rusty Angelfish prefers environment with prolific algae growth, rocky reefs and rubble areas. This Angelfish can grow up to 4 inches in length.  It is better to keep the Rusty Angelfish in the tank no less than 50 gallons and the tank should be well stocked with plenty of live rocks that encourage the growth of algae; and lot of hiding places are also needed if you wish the Rusty Angelfish to thrive well in the tank. The Rusty Angelfish should not be combined with the same species as it can become aggressive. It is also considered reef safe but with caution, because it tends to nip over the corals, soft corals and clam mantles if not properly fed. The Rusty Angelfish is an omnivorous species and likes to feed on natural algae, and brine shrimps and other meaty foods as well. Since the Rusty Angelfish is egg scattering species, breeding it in captivity is quite successful. It is semi aggressive, and generally does not bother other tank inhabitants and that makes it a valuable addition to any reef tank. It grows well in a temperature range of 72-78?? and pH of 8.1-8.4. The Rusty Angel should not be kept with other angelfish species.