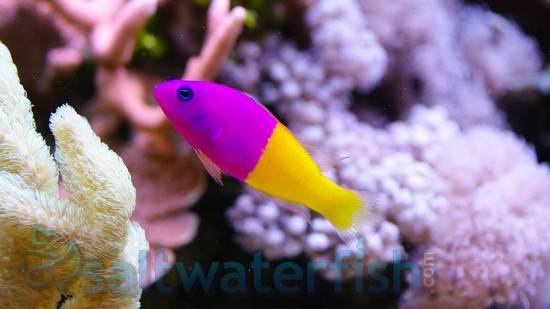 The Royal Dottyback,, Pseudochromis paccagnellae, features a half yellow and half purple body making for an interesting addition of color to most tanks. The hermaphroditic Royal Dottyback is hardy and low maintenance. The Royal Dottyback will  defend its claimed territory against similar looking fishes so caution should be heeded when housing with other dottybacks or basslets. If multiple of the same species are desired, they must be introduced at the same time. The Royal Dottyback may pick on small sessile inverts like tubeworms. It thrives best in a tank with plenty of live rock hiding places and a tightly sealed lid to prevent escapes. Their carnivorous diet consists of mainly brine and mysis shrimp.
Got my order today. All except this one fish are very active. I think it may be because the bag it came in seemed to have lost air during transport, but everything else was fine. Now I cannot find it in my tank. I think it's hidden in some of the rock (hopefully still alive) but I don't know.. This particular fish is beautiful. Thanks Saltwaterfish.com. I will definitely be ordering again. Reviewed by:   Rosie Howard on 08/27/2014
This fish ate almost immediately upon entering the tank. It does not seem to be picky. Whatever I put in there it eats. It is a bit shy though. It hides in the rocks and comes out to grab a bite to eat and then retreats.A nice fish to add color to a tank and that is exactly what it does. Reviewed by:   Joseph Klingbeil on 03/21/2016
don't recall if I got his fish from here or another place I frequent but this fish is a lively swimmer who swims out in the open in my 40 gal reef tank most of the time. He does not attack other fish but holds his ground. Eats brine shrimp and pellets. I feed brine shrimp mostly as I have 3 cardinals who are fussy eaters preferring brine shrimp. A colorful fish active from the moment he entered my tank. Reviewed by:   Phil on 03/19/2017