You will receive at least
281 reef rewards points
if you buy any item in this page.

The Mocha Storm Clownfish (Amphiprion ocellaris) has a pearlescent white body with varying brown or orange markings, dark black eyes, and black tipped fins. It is a very popular fish and will get along with other Clownfish in the same aquarium, depending on the size of the aquarium. It is also one of the first marine aquarium fish to be bred successfully in captivity. They do not need an Anemone to survive, but will accept many different Anemones as its host, including corals. Their favorite Anemones to call home are the Carpet Anemones Stichodactyla Gigantea or the Magnificent Anemone Heteractis Magnifica.

Currently Mocha Storm Clownfish does not have any reviews.

Currently Mocha Storm Clownfish does not have any questions and answers. 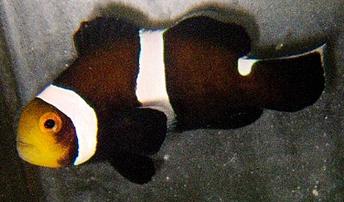