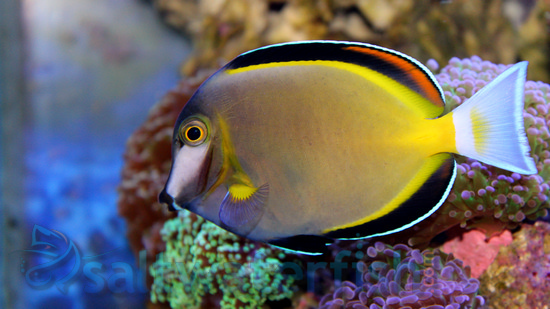 The Powder Brown Tang, Acanthurus japonicus, also known as the Powder Brown Surgeonfish, Japan Surgeonfish, and White-faced Surgeonfish. The Powder Brown Tang has an oval disk shaped body and beautiful coloration, with a generally brown to blackish blue body, and black dorsal and anal fins that have a beautiful blue edging. A red band marks the back of the dorsal fin and yellow stripes run along the body just above and below these fins. The Powder Brown Tang also features a single spine on each side of the caudal peduncle, which is called as scalpel. Be careful while handling this fish, since the presence of this scalpel can inflict painful wounds. This fish is sure to be a beautiful addition to your tank.
The Powder Brown Tang can grow to be 8" and requires a tank no less than 120 gallons, with ample open space for swimming. Since it loves to graze, we suggest you to keeping live rocks which can provide algae growth and to create crevices where it can inhabit. It is a peaceful fish, and it may get along with some of the other generally peaceful Surgeonfish, but will still have trouble with any aggressive Tangs, often becoming the victim. It is best kept as the only Tang in the tank, unless kept in an extremely large and cleverly decorated system where it can hide if threatened. It will also not bother any peaceful fish, small or large, and does well with smaller semi-aggressive fish like Clownfish. They will not bother even the smallest, most peaceful Goby, Blenny or other peaceful fish. The Powder Brown Tang is Invert safe and will not bother the Corals present in the tank either, though it is advisable to keep the corals glued down due to accidentally dislodging them while swimming.
Like many other Tangs, they are susceptible to disease, so the water quality needs to be pristine and stable, or they can suffer disease, and will succumb to illness quickly. However, once acclimated they do become very hardy fish if kept in an optimal environment. They are mainly herbivores, but also need some meaty preparations for it's continued and overall health. Their diet should consist of dried seaweed or dried algae using the lettuce clip, Sea Veggies, Spirulina, Japanese Nori and other plant based foods along with frozen Brine and Mysis Shrimp, and vitamin enriched flake and pellet foods. It thrives well in a temperature range of 72-78°F and a pH of 8.1-8.4.