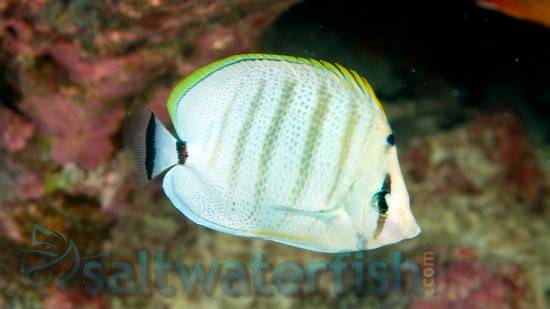 The Pebble Butterfly, Chaetodon multicinctus, also known as the Multiband Butterflyfish, Pebbled Butterfly, Many Banded Butterfly Fish, and Hawaiian Pebble Butterflyfish. It has a subtle color pattern. Its body is a creamy white with five or six tan bands running vertically. There is also a dark vertical eye bar and a black band in the tail fin. But its distinguishing feature is an overall covering of many small spots which create a pattern of horizontal and vertical lines and hence its common name. It is native to the Hawaiian Islands and Johnston Atoll.  The Pebble Butterfly can grow up to 5 inches and should be kept in a tank no less than 60 gallons, and no less than 100 gallons if kept in a pair. If keeping a pair, they should be added at the same time to avoid aggression. The tank should also be decorated with rocks creating many caves for hiding places and lots of rocky rubble. Also make sure there is plenty of open swimming space, as it swims freely and usually spends a good deal of its time in the open water, moving in and out of crevices. The Pebble Butterfly is highly territorial so should not be housed with Angelfish or other Butterflyfish, unless a mated pair, and they should not be kept with any aggressive species. They are not considered reef safe, as they will nip at Sessile Invertebrates, Stony Coral Polyps, Cauliflower Coral, Porites spp. and Montipora spp,  Polychaete worms, and small Shrimps.  Their diet should consist of Omnivorous foods, such as a good variety of live, frozen, and prepared formula foods with emphasis on Vegetables and Spirulina, also include live and/or frozen Brine shrimp, Japanese Nori, and several sponge based frozen foods. Feed it at least twice a day for it's continued health. Getting them feeding can be difficult, so you can try  placing open Mussels and Clam inside the tank in their open shell, or providing some live small Polyp Stony Corals. Because adapting it to life in the aquarium can be tricky with this fish, it is suggested for a more experienced aquarist, but they are moderately hardy, and once it is adjusted to captivity it can make a nice addition to a saltwater aquarium. They will thrive in a temperature range of 72-81??F and a pH of 8.1-8.4.