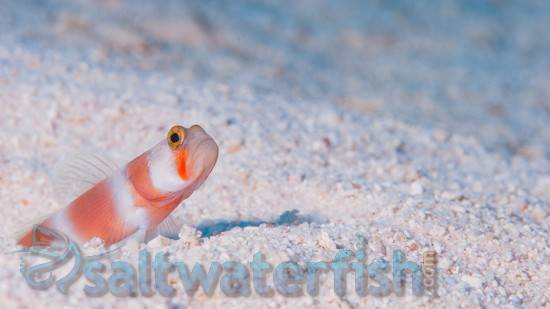 The Orange Banded Prawn Goby, Amblyeleotris aurora, also known as the Bullet Goby, Brown Barred Goby, Pink Band Goby, and Banded Shrimpgoby, features a beautiful orange striped body. Its small body makes it perfect for a nanotank. The Orange Banded Prawn Goby thrives in tanks with plenty of live rock, a sandy substrate, and can form a symbiotic relationship with Alpheus shirmps. It does well in pairs or as a solitary individual. The Orange Banded Goby will feed on a carnivorous diet consisting mainly of mysis and brine shrimp and other live or frozen meaty preparations. This fish should be housed with other non-aggressive fish to prevent predation and should be kept in a tank with a tightly sealed lid to prevent escapes.