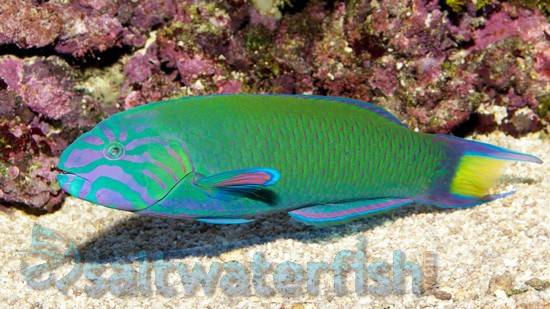 The Lunare Wrasse, Thalassoma lunare, also known as the Moon Wrasse for its yellow caudal fin shaped like a crescent moon. They exhibit a vibrant green body with unique blue/green/pink markings on its face and a luminescent yellow tail.
The Lunare Wrasse is best kept in a tank of at least 75 gallons with a tightly sealed lid to prevent escapes, plenty of live rock hiding places, and a deep sandy substrate. As a voracious carnivore, the Lunare Wrasse should not be kept with small, vulnerable sessile invertebrates. They will get along nicely with corals and other fish. Diet includes small inverts including bristle worms.
The Lunare Wrasse will change its coloration patterns as it matures. If kept properly, this is one of the most spectacular wrasse species available.