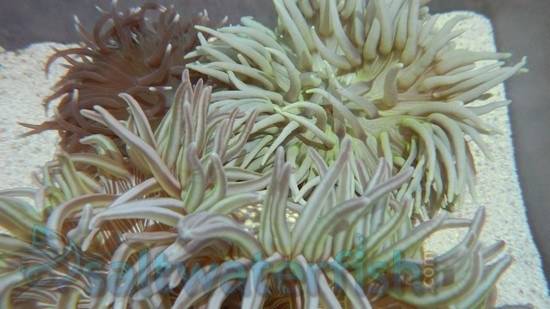 The Long Tentacle Anemone, Macrodactyla doreensis, also known as the Corkscrew Anemone, Sand Anemone, and Red Base Anemone, comes in a multitude of colors and features uniquely long tentacles. It slender, smooth tentacles originate from its flat oral disc making for an elegant and active display in the tank. It is a relatively peaceful anemone that won't bother other inverts so it is considered reef safe. Growing up to 20 inches, the Long Tentacle Anemone should not be kept in a tank less than 30 gallons. It will thrive in tanks with moderate lighting, moderate flow, and a thick sandy substrate of at least four inches. The Long Tentacle Anemone will rely primarily on zooxanthellae's photosynthetic ability as its food source but will readily accept carnivorous preparations as a supplement.
NOTE: The 'colored' designation means this species will be one of the most beautiful specimens in our stock.
Beautiful specimen. Arrived fast and healthy. Put it in a crevice and immediately stuck and accept frozen shrimps. In a matter of days, it has expanded about 30% and is the showpiece of the Aquarium. Great price and easy to care! Reviewed by:   I. Nieves on 01/02/2017