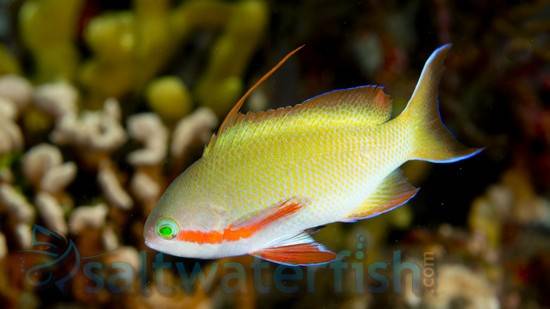 The Huchtii Anthias, Pseudoanthias huchtii, is hermaphroditic meaning all are born females, and when needed the dominant female turns into male. They also display sexual dimorphism with the male displaying a yellow/green body color wit a horizontal orange stripe just behind the eyes and electric blue highlighting the fins and tail while the female displays the same yellow/green body and orange stripe behind the eyes though is not nearly as vivid and has no blue highlights. They can be kept as a mated pair, or in a small school of females. Avoid keeping two males in the same tank, as it can lead to extreme aggression.
They are pretty hardy and can be kept in a reef tank setting with plenty of live rock. Diet should include a variety of a steady supply of copepods, frozen mysis and vitamin enriched brine shrimp, as well as high quality flake foods 3-5 times daily.
Reviewed by:   DP on 10/08/2014