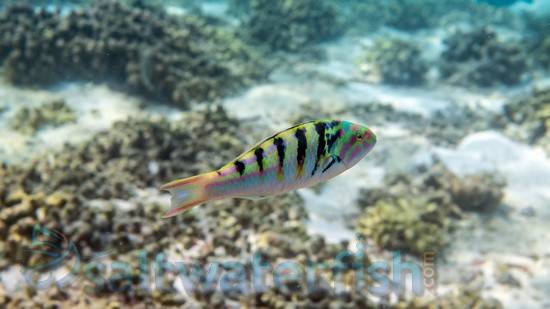 The Hardwicke Wrasse, Thalassoma hardwicke, is also known as Hardwick's Wrasse or the Six Bar Wrasse. The Hardwicke Wrasse features an amazing array of colors rarely found on fish. Its body is a shimmery pink/yellow color, its face features a neon green and pink mask, and interrupting it all are six thick black vertical stripes.
They require a tank of at least 75 gallons containing plenty of live rock, a sandy substrate, and a tightly sealed lid to prevent jumping. They can be rather aggressive and will sometimes feed on small sessile inverts so be cautious when pairing it in your tank. This behavior is less likely if the wrasse is well fed. They can be kept in pairs but should be in a larger tank to accommodate both individuals. If cared for properly, the Hardwicke Wrasse can be the centerpiece of your aquarium with its extravagant coloring.