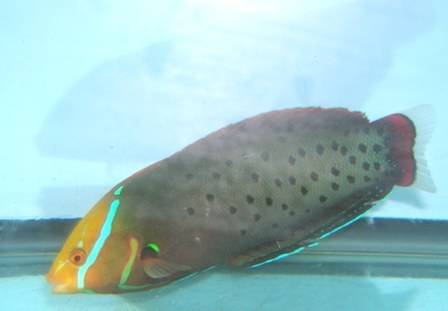 The Formosa Wrasse, Coris formosa, also known as the Queen Coris Wrasse, features a grey body with scattered black spots and a bright orange face with a beautiful electric blue line bisecting it. The Juvenile Formosa Wrasse looks very different. It resembles a traditional Coris Wrasse with a red striped body and a voluminous crescent caudal fin.
They will eat a carnivorous diet and may pick on small sessile inverts. The Formosa Wrasse is best kept in a tank of at least 100 gallons with plenty of live rock hiding places, a sandy substrate, and a tightly sealed lid to prevent escapes.