I love love love my sea hare. I actually named him Shrek because of his ears. Destroys algae and is a unique addition to any tank. Some say that these are ugly but I think it is that they are so ugly they are cute. Does what he is supposed to do. Love watching him lick the tank glass and eat from his algae clip.

I had a moderate hair algae outbreak in my 240 gallon system. I obtained one of these guys to help out. Within about a week, the hair algae was gone. This animal is nocturnal, and eats and eats. I have been supplementing his diet with nori strips. I don't want him to starve to death, as that's just wrong and could cause a tank crash, I've heard, and would probably kill thousands of dollars worth of coral and fish.

Dolabella sea hare. I bought the smallest one hoping he won't starve to death after cleaning all algae. He does a good job & you can tell every morning where he has been. He is ugly but does what he was bought to do.

This guy is an algae eating machine. I had an absolute mess of a green hair algae bloom in my 44 gal seahorse tank. This guy picked it clean in about a week and a half.

Ordered two Sea Hares and both arrived in great shape. Both are actively eating hair algae in my tank. They have been a great addition to my tank that has been set up for about 8 years.

I purchased two sea hare's, it been about 2 years having problems with hair algae in a 55 gallon reef tank, I had for 5years. I used and did everything; could not get the algae under control, I was told for the first time a month ago about the sea hares, so I researched them before buying. the service at saltwaterfish.com is great and arrived very quickly. As soon as they arrived and Acclimation Drip Method was done for an hour; they was placed in the tank. The hares started doing their job asap and now it been 3 weeks and no more hair algae woohoo :-). Anyone having issues with any type of algae problems; then here the tool for it, but they are very ugly. I now feed them dried seaweed and place it in different places through out the reef and they find it with no issues before the crabs get to it, they love it.

Dolabella auricularia hares from Saltwaterfish.com are the only sea hares I've ever had that consistently eat bryopsis. I've purchased the same species, or at least that's what they were advertised as, from other vendors and none eat have eaten bryopsis. Unfortunately, all of the Dolabella auricularia hares I've purchased from saltwaterfish.com have also ended up dead in my 18" sebae. I suspect it's related to my wave maker which cycle the pumps over the anemone on and off ever 15 minutes. It gives the hare just enough time to get into position to be blown straight into the anemone when they engage. One time I did find the hare under the anemone which makes me suspect they're actually stupid enough to crawl straigh into danger. Both times, when they're in distress, they've excreted their purple goo, but the goo has stayed sort of slimed to the animals body and hasn't fouled the tank. I'm hoping I can find a way to keep these animals healthy and happy in my tank. In addition to eating bryopsis, they're very interesting animals. The last one I had would occasionally come to the top of the tank and put it's head outside of the water. On one occasion I was able to hand feed it strips of wet seaweed. They're very interesting and helpful animals.

Just as pictured. Acclimated well and quickly. Is an absolute destroyer of green hair algae. The hares are VERY susceptible to mishaps with in-tank equipment. You must make sure all intake valves are covered or these beauties will find a way to get caught and, when they get stressed or, even worse, die, they will quickly foul your entire tank and can easily kill just about everything in it. A system crash caused by one of these a real scenario, so make sure you don't leave anything to chance. Also, a tank that only has a little algae will quickly run out of food for the hare, so probably best not to order one unless you have a real problem. Keep supplemental food on hand to feed them once the tank is picked clean...

Currently Dolabella Sea Hare does not have any questions and answers. 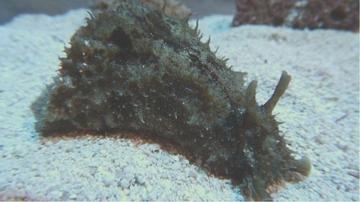