Caring For The Aiptasia Eating Filefish

Is the Aiptasia Eating Filefish (Acreichthys tomentosus) right for your aquarium? Check out our guide so can make a better informed decision.

One of the most interesting and functional saltwater fish is the aiptasia-eating filefish, Acreichthys tomentosus, part of the Monacanthinae (one-spine) family. 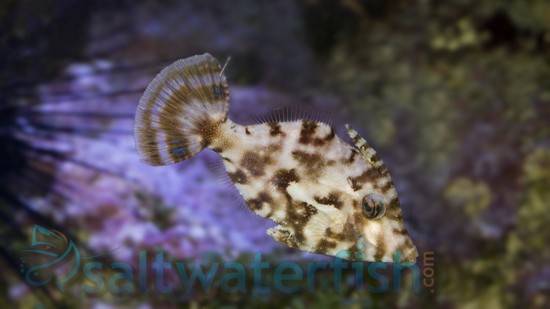 Compared with some of the more brightly-colored reef fish we keep in our tanks, the lowly, matted filefish can seem a bit drably colored, but what it lacks in show-stopping vibrance, it makes up for with character, personality and, well, helping out around the tank.

At first glance, their most notable physical features features are the large dorsal fin, similar to a triggerfish, with two very sturdy ventral fins and a fan-like tail.

Their skin is rough, and textured, with a mottled olive-drab coloration that is used for camouflage and actually looks a bit like they were painted for military duty. The relative brightness/darkness of their coloration will change, throughout the day depending on the situation, the fish equivalent of their mood, I suppose, and their proximity to cover, changing the coloration to blend in (when they want to). While their coloration certainly isn’t the brightest in the tank, it can and will hold your attention and the attention of your guests.

All the while, their eyes visibly move around in their sockets scanning the aquascape for a bite to eat. At times they move so slowly over the rocks, while staring so intently, they seem to be measuring the pros and cons of each and every nip, which is an interesting and welcome behavior, when compared with the frenetic, constant grazing of tangs and other fishes.

In the ocean, the matted filefish tends to be found close to shore, in or near beds of seagrass—which sort of explains their laid-back, slow-swimming, cautious demeanor.

Therefore, if you have a bustling reef tank with mega water flow, this might not be the most natural fit for these guys, but I can share my own experience is that they do just fine with a moderate-to-strong gyre water flow. As I mentioned earlier, they seem to harness the current, like a sail, to get to where they are going.

As their name suggests (or plainly states), the aiptasia-eating filefish will typically chow down on the dreaded pest aiptasia, or glass anemones. But there is no guarantee your fish will hunt down those dreaded anemones and it is also important to note that is not all they will eat.

Acreichthys tomentosus will also eat live meaty foods, like blackworms, meaty frozen foods and there are reports that they will also eat pellets—although I will report that the individual in my tank turns away from commercially prepared foods (flakes and pellets).

Please don’t plan on this fish meeting all its nutritional needs by aiptasia-alone.

One thing to note is that this fish can be a bit shy, compared to the more boisterous and vibrantly colored reef fishes.  It is recommended that you pay close attention to them around feeding time, to make sure they are getting enough to eat and target feed them, if necessary by sending a puff of meaty frozen food in the direction of the boisterous fish and then a smaller, more targeted ‘puff’ in the opposite direction towards the filefish to help ensure they get enough to eat.

Reef safe or not?

While it is advantageous that the aiptasia-eating filefish has acquired a taste for the namesake pest aiptasia anemones, it can also sometimes acquire a taste for other fleshy coral polyps in your tank.

This is not an unusual behavior for a fish that, by nature, eats fleshy organisms that grow on the reef rocks (like some butterflyfish and angelfish).

Sharing my own experience here, the individual in my tank appears to eat aiptasia and take meaty foods well and leaves everything else alone. It does scour the aquarium live rock very diligently and may be eating other inverts that are non-ornamental in nature, like small fan worms, etc., but he or she leaves my corals alone.

But there are reports that they sometimes can be polyp-nippers. So you might want to be sure your colonies are large enough to tolerate some grazing before adding this fish to your tank and watch your individual closely once you’ve introduced them into the tank to try and spot this problematic behavior before it becomes too much of a problem.

How big will they grow?

They reach a maximum size of about 4 - 5 inches—but due to their relatively slow swimming nature, they could be kept in tanks of about 29-gallons and up (small specimens).

They don’t have any particular water-related requirements either. Standard reef aquarium water parameters will be sufficient:

Follow the standard instructions for acclimating fish provided with your shipment. You can find more information here.

Albert B. Ulrich III is a long-time saltwater aquarium enthusiast and Amazon bestselling author of The New Saltwater Aquarium Guide and SaltwaterAquariumBlog.com