Loved because of their distinct shape, long, flowing fins, giant eyes, vertical black stripes, silver sides and white spots, these fish are hardy, peaceful towards other species, including corals and are bold—not afraid to swim out in the open around your tank.

They generally do so well in captivity that they are one of the easiest species to breed in the home aquarium.

More on that a bit later.

In the wild, Banggai cardinals all live in reefs around the Indonesian archipelago.

Archipelago is a fancy word for a chain of islands.

These fish are considered to be a threatened species, on the ICAN red list. That’s the bad news. The good news, however is that this fish species is relatively readily available from aquaculture.

Relatively hardy, P. kauderni can learn to accept most prepared aquarium foods. If you have a particularly shy-feeding individual, start with live foods, like brine shrimp or black worms. Then ween them over to frozen foods (like Mysis shrimp, brine shrimp, bloodworms), and eventually flakes or pellets.

They don’t have any particular water-related requirements either. Standard reef aquarium water parameters will be sufficient:

Follow the standard instructions for acclimating fish provided with your shipment. You can find more information here.

Banggai cardinalfish are reef safe. They will not pick at corals or other invertebrates and are safe to keep with any invertebrates that won’t bother them.

They are also good community reef fish, that will get along peacefully with other non-aggressive community fish.

Best kept singly, or in mated pairs, you should exercise caution when adding more than singly or as a pair to your tank, because they can be very aggressive towards other members of the same species.

How to tell the difference between males and females

With just a brief glance, it can be challenging to tell males from females (although the Banggai’s never seem to have any trouble figuring that out.

Some people claim that males have broader jaws that exhibit a more distinct bulldog shape, but other than when that male has a mouthful of eggs, I don’t personally find that way of differentiating the genders to be all that reliable.

I’ll let you in on a secret (or trick) that works much better, if you able to inspect a well-fed fish up close.

On the underside of the fish, right in front of where their bottom fin comes out, if you look really, really closely…you will see that there is a tiny little vent, or vents that extend down below the round belly of a well-fed fish.

Those tiny vents (sometimes they look like black specs or bumps, other times you can see they are more tube-shaped) are the real difference between male and female Banggai Cardinalfish.

A male has 2 vents, so underneath the fish, it looks a bit like this: 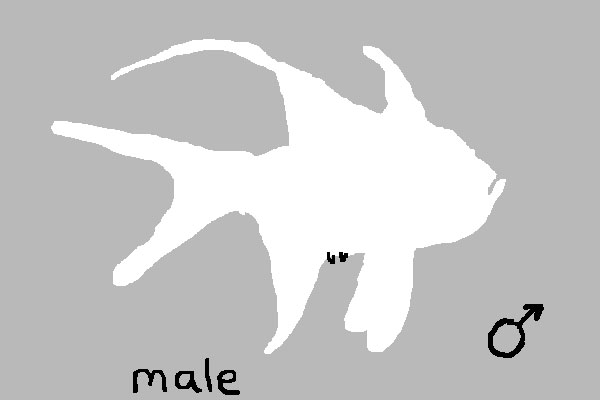 A female has 1 vent, so it looks a bit more like this: 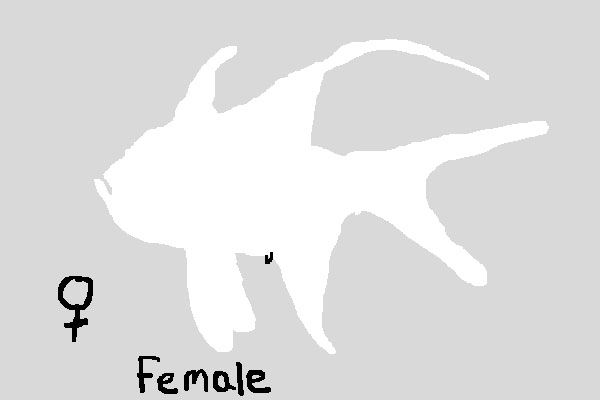 The size of the vents in the illustrations above are exaggerated a bit, to make the point.

So when you get your cardinals home, take a close look at them. If you can find a male and a female, you are likely to have a lot of success pairing them up, without the need for them to fight it all out and establish their own pecking (and breeding) order.

That doesn’t mean you won’t see any aggression. I’ve seen SERIOUS aggression even between a bonded pair that had previously spawned together.

The ideal home aquarium for a pair of cardinalfishes has enough hiding places where a battered male can go to avoid the aggressions of female.

As a last resort, consider removing the male to a breeding net or even back-up aquarium until he has recovered, and the aggression subsides.

Saltwater fish generally spawn and reproduce in one of three ways. Pelagic spawners are egg-scatterers. They lay and fertilize their eggs in the open water. Angelfishes and tangs are examples of pelagic-spawning fish.

Rather than scatter their eggs, demersal spawners, like the clownfishes, lay sticky eggs on a hard substrate, like a rock or in a nest.

Cardinalfishes, like the Banggai cardinal are mouthbrooders. When they spawn, the female lays a clutch of eggs. The male fertilizes them in the open water and then he sucks the eggs into his mouth.

You will know he’s holding a clutch of eggs, because it will look like he has a mouth full of (tiny) marbles.

About three weeks after spawning, some of the cutest miniature Banggai cardinals you have ever seen in your life will swim out of his mouth and just be hanging out in your tank.

A newly emerged baby Banggai is large enough to eat newly hatched brine shrimp and many will even accept prepared larval pellets—otohime.

If your P. kauderni ‘hatched’ (swam out of the Father’s mouth) in a community reef tank, you should probably remove them from the display tank to a tank dedicated to raising them to a size larger than the size of the other mouths in your tank.

To get your pair ready to spawn, help them bulk up by feeding high calorie live foods, like black worms, brine shrimp and mysid shrimp 2-3 times a day (or more, if you are home).

If your male had a mouthful of eggs, but you don’t see any babies, one of a few things might have happened.

A male cardinal fish generally stops eating while they incubate the eggs in their mouth. Sometimes, however, the male will actually eat the eggs.

There are at least two prevailing theories about this—some believe that males who have not built up sufficient energy reserves (fat), eat the eggs if they get too depleted. Others speculate that the males will eat their eggs or young if they become too startled or get sufficiently disrupted while incubating.

But before you fear the worst, be sure to check the sump. Many aquarium owners have been pleasantly surprised to find a small shoal of baby Banggais hanging out in their sump.

There is little wonder why the Banggai cardinalfish is such a popular saltwater fish. Interested in seeing if you can establish a breeding pair in your home reef tank? Add a few to your cart today.

Albert B. Ulrich III is a long-time saltwater aquarium enthusiast and Amazon bestselling author of The New Saltwater Aquarium Guide and SaltwaterAquariumBlog.com