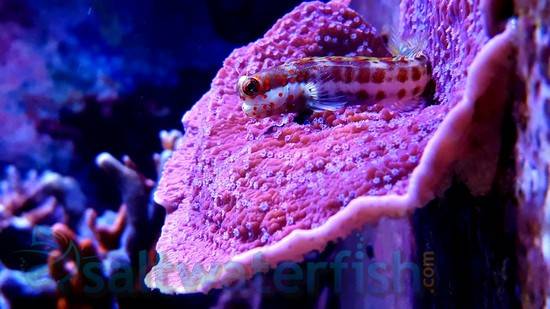 The Orange Spotted Lawnmower Blenny, Istiblennius chrysospilos, is also known as the Redspotted Rock Skipper, Redspotted Blenny, and Orange Spotted Blenny. It exhibits a captivating blend of white and orange spots across its slender body making it one of the most beautiful species of blenny.They are a peaceful species that spends most of its time perched along live rock and the bottom of the tank searching for algae to eat. Plenty of live rock formations are advised for this species.  The Orange Spotted Lawnmower Blenny is considered reef safe, but should be monitored in tanks with stony corals and clam mantles as they can sometimes can nip at them, if there is not enough algae present in the tank. Though they are considered peaceful, their territorial nature includes other blennies. Larger systems can accommodate multiple types of blennies while smaller systems are best suited with only one blenny. They are best kept in tanks with a tightly sealed lid to prevent escapes, and as an individual - unless a true mated pair can be secured. They can reach a size of 5 inches, and should be kept in a tank no less than 30 gallons, and no less than 70 if keeping more than one. Aside from algae, they will readily take supplements of other herbivore aquarium foods, as they far prefer algae in the form of nori attached to a rock or macro algae placed in the tank. They???ll also eat any nuisance algae that happens to pop up in your tank. They will thrive at a temperature range of 72-78??F, and a pH of 8.1-8.4.