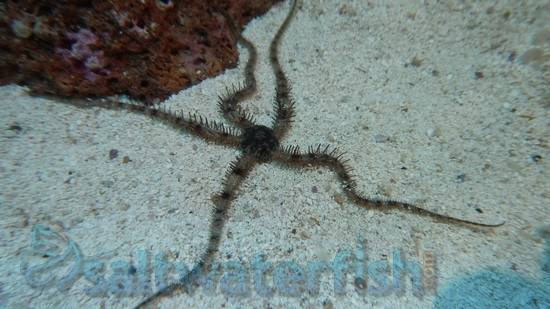 The Brittle Star, Ophiocoma sp., is a species of starfish with long, flexible limbs that have small pointed projections across their bodies. They come in colors of black, brown, and a combination of the two, sometimes having grey bands around some of their limbs. They require a tank with plenty of live rock to scavenge from, and take refuge in during the day. A sandy substrate is also suggested, as they will burrow and help aerate the sand.
The Ophiuroidea Class is made up of Starfish that have a flat and smooth central disc with five spiny limbs. These limbs vary from species to species and can be short, long, thick, or thin, and come in different colors. Some limbs or "arms" will lack spines altogether. Each arm is composed of top-side plates that allow for excellent flexibility and quickness, but have a downside of easily breaking. Brittle Stars, like other starfish, can regenerate their limbs over time if they are injured.
It should never be exposed to air while handling.
These are so healthy,, and very easy to take care of. I received 2 very nice ones,, in great shape. Reviewed by:   Lou on 08/04/2014
Reviewed by:   beth anne Gruizinga on 10/14/2014
All I can say is "Wow!" This guy was active in the bag, and once in my DT he was immediately active, and he's huge! Reviewed by:   Lisa on 06/25/2015
This is one of the coolest things in my tank! He arrived healthy and active, even in the bag. He quickly made himself at home, and he's so fun to watch! Reviewed by:   Lisa on 07/03/2015
Great starfish, just like the picture. Very active and always have to search for the starship. Reviewed by:   Fred Chubin on 09/02/2017